For three generations our family has helped make things right for our clients after an accident. Our success is measured not in days or weeks or even years, but over half a century. Every day, we are reminded of the history we must honor in our work for each client. Our long tradition of hard work and commitment to fighting and winning for clients began in 1899, when attorney Mandell Bernstein was born in Detroit. Then, when attorney Estelle Koblin Nelson passed the bar in 1936, she established her own groundbreaking legacy that we remember every day.

Today, we follow in the footsteps of these pioneers while respecting the core values of integrity. We respect the honor and hard work that helped lay the foundation for the current generation of Bernstein attorneys.

The Sam Bernstein Law Firm story begins at the end of the 19th Century in Detroit with the birth of attorney Mandell Bernstein.  Mandell was in the first generation of his family born in the United States.  He was a leader in the Detroit legal, civic, political and Jewish communities. 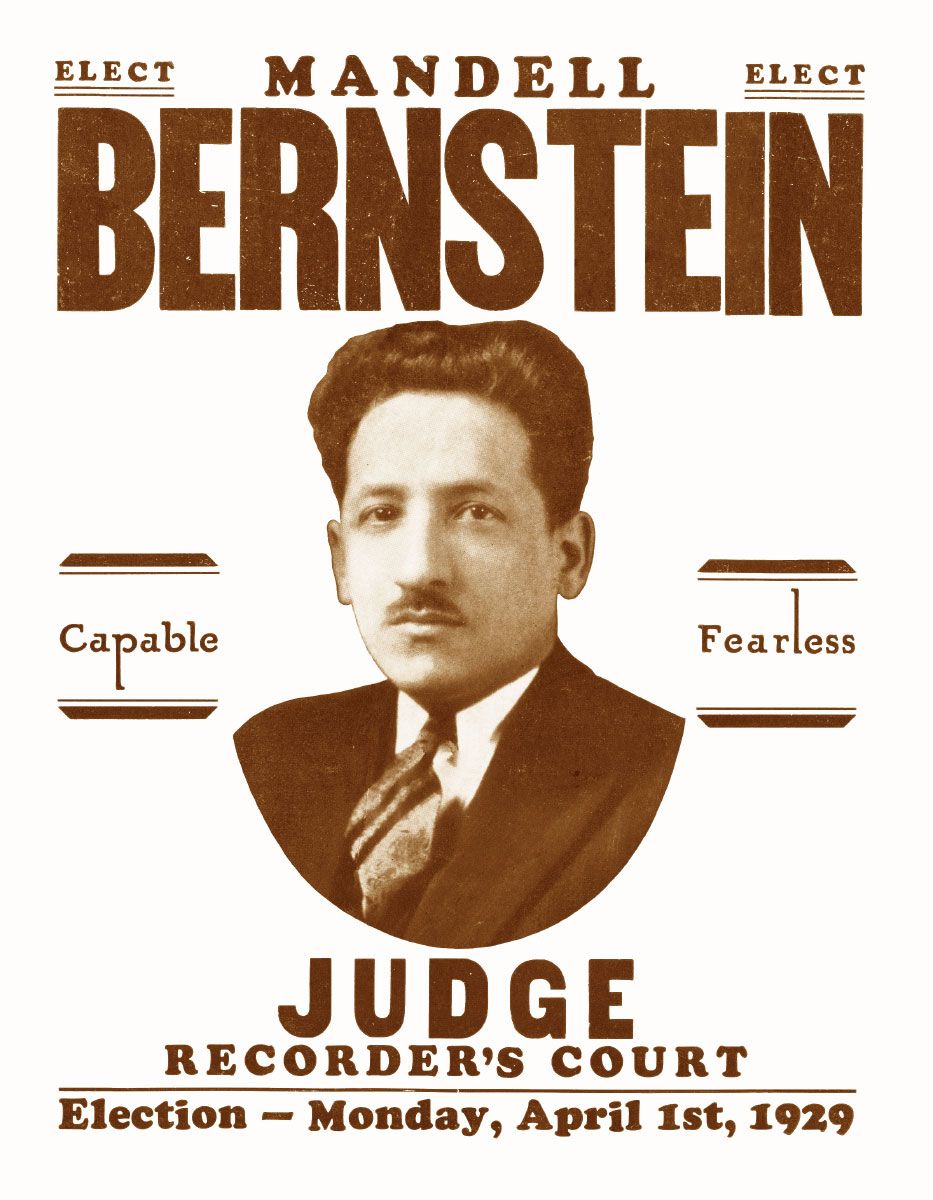 He attended the Detroit College of Law and was admitted to the Michigan Bar.  Mandell was a partner with his brothers David and Jacob Bernstein in the practice of law.  His successful legal practice involved the representation of labor unions, community leaders, and businesses.  Mandell was also a highly respected counselor to civic and political leaders.

Mandell and his brother, David, hosted a popular radio program in both English and Yiddish that was an important part of Detroit Jewish life during the 1930s and 40s.  He was married to Hazel Bernstein and rasied two children, Diane and Sam.

Attorney Estelle Koblin Nelson was one of the first female lawyers in the state of Michigan.  She attended the University of Detroit Law School, and was admitted to the Michigan Bar in 1936.

Estelle was a life long learner who, in addition to a law degree,  earned a graduate degree in Library Sciences from Wayne State University.  She was also an accomplished multi-media artist, affiliated with Cranbrook, The Scarab Club and Arts and Crafts.  Estelle was married to Harold R. Nelson for 48 years and raised two children, Marcia and Susan (wife of attorney Sam Bernstein).

Attorney Sam Bernstein carries on the tradition of his father, attorney Mandell Bernstein.

For almost half a century, attorney Sam Bernstein has championed the cause of the seriously injured.
Many people throughout Michigan and the rest of the United States are familiar with the warmth and professionalism generated by Sam and his firm.

Almost half a century ago, he established his own practice. Today, his firm is one of the leading personal injury firms in the United States. Attorneys at his firm now serve in leadership position in the Michigan legal, civic, educational, and political arenas.

Sam has been a frequent lecturer on the law and legal practice at numerous law schools, bar associations, and community organizations. He is licensed to practice law in Michigan, Ohio, Illinois, Florida, and New York and serves as an of-counsel, retired shareholder of the firm he founded.

The third generation of Bernsteins in the law include attorney Mark Bernstein and attorney Beth Bernstein.  Mark and Beth serve together as partners in The Sam Bernstein Law Firm, PLLC.  Together, they honor their family’s tradition of helping others get justice in court and the community.

As a partner at the Sam Bernstein Law Firm, PLLC and key member of the law firm’s leadership team, Beth helps set the strategic priorities of the law firm.  She is a tough, strong advocate for clients who turn to her for help – trusting her to listen with compassion and understanding.

Attorney Mark Bernstein works with Beth to work in courtrooms and communities across Michigan to make sure everyone gets a fair shake – not just powerful corporations and insurance companies.  He continues the Bernstein family commitment to public service, work in government, business and the law.

Mark serves on the Executive Board of the Michigan Association for Justice.  He was elected by leading defense and plaintiff attorneys from across Michigan to serve on the State Bar of Michigan Negligence Section Council.  He was recently honored as a Fellow of the Michigan State Bar Foundation and a Leader in the Law by Michigan Lawyers Weekly.  Mark is recognized as a Super Lawyer for excellence in the practice of law.

In 2012, Michigan voters elected Mark to serve on the University of Michigan Board of Regents.  Over 2.3 million voters in the state-wide election supported his campaign to make college affordable and accessible for Michigan families.  His term on the Board of Regents ends in 2020.

Mark was the longest serving member of the Michigan Civil Rights Commission.  He was appointed to serve on the Commission by Governor Jennifer Granholm in 2004 and served until 2012.  In his work on the Commission, Mark was a strong voice for fairness and equality.  Mark also served as Director of Press Pool Operations in the White House during the Clinton administration.